Croatia is fast growing into the number one eastern European holiday destination, but one of its less celebrated delights is the harbour town of Rijeka.

Located on the stunning Adriatic, its rugged coastline and numerous gentle bays make Rejeka ideal for swimming and other aquatic activities.

But it is not just all about a languid beach life. Every year the town comes alive with its annual carnival – an event that has a 100-year-old tradition and attracts numerous masks and carnival groups, spectators and media, as well as guests from around the country and abroad. 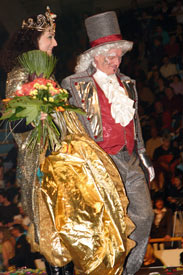 And if you fancy stepping off the beaten track and experiencing some of Croatia’s culture and history, as well as its sense of fun, then there’s no better time than carnival.

The events are a mixture of the bourgeois carnival and the ancient Slavs’ folklore elements and mythology.

The Rijeka Carnival runs between mid January and mid February and it all kicks off with the Carnival Queen Contest and the Opening Ceremony with the Mayor’s symbolic delivery of the City keys to the Master of the Carnival.

Concerts, exhibitions, parties, performances and other festivities fill the days that precede the major event – the International Carnival Parade.

Hundreds of floats, thousands of masks and streets crowded by spectators are the result of a competitive spirit built on originality, inventiveness and wittiness.

Croatia holidays are very popular and also very good value for money. Global Holidays has a great range of discount holidays to Croatia.

Currently one of the trendiest places to visit in the Mediterranean, Croatia is also widely regarded as one of Europe’s most beautiful countries. Although the nation’s recent tourism boom may seem to be a modern trend, Croatia was in fact a popular tourist destination prior to the outbreak of war in the early 1990s and its current popularity is therefore more of a revival than a novelty to its citizens.

Croatia takes up a stunning portion of Adriatic coastline, part of which belongs to the city of Dubrovnik. A popular tourist destination, Dubrovnik is a favourite with many well-known celebrities and has been frequented in recent years by Hollywood names such as Tom Cruise, Sharon Stone and Steven Spielberg.

The city is undoubtedly one of the most beautiful in the world and has retained its charm and appeal, despite around 68 per cent of buildings in its historic old town, Stari Grad, being hit by shells during the civil war in 1991 and 1992. The old town itself has been pedestrianised, so expect to spend your days ambling up and down cobbled streets and strolling through marble-paved squares.

One of the key features that you cannot miss when you visit Dubrovnik is the medieval city walls, or Gradske Zidine. The walls are among the best preserved in the world and were key to Dubrovnik’s elevation to Unesco
World Heritage status. Towering 25 metres above ground level and with no less than 16 towers, the walls stretch for two kilometres and offer unrivalled and spectacular views across the city.

Once you have your bearings, the Gradski Muzej (city museum) provides an excellent way to discover the history of Dubrovnik. Housed in the Rector’s Palace, the museum is best visited between mid-July and mid-August, when it can be combined with a visit to one of the concerts held in the central courtyard during the Dubrovnik Summer Festival.

This represents one of the key entries on the tourism calendar, with cultural events taking place throughout the city. The festival has been taking place since 1950 and has become an important part of city tradition. The combination of music, theatre and folklore makes for a fascinating cultural treat and an increasing number of top artistes take part every year.

The festival opens with a dramatic, firework-laden ceremony, which gives way to several weeks of theatre, concerts and dance shows, many of which take place on outdoor stages. Although it started as a celebration of
Croatian artistes, the festival has grown to become an international feast of entertainment and is well worth fitting into your holiday schedule.

Other features of interest in Dubrovnik include the main religious centres, the Katedrala and Crkva Sv Vlaha, and the monastery complex, which has a fascinating museum housing a number of important relics and paintings.

Dubrovnik has its own airport which is served by flights from most European cities, although many of the flights travel via the capital, Zagreb. Although the airport is some 17 kilometres away from the city itself, a Croatian Airlines bus meets all arrivals and transports passengers to the main bus station. Buses also travel back to the airport an hour and a half before all flight departures.

The city also benefits from a number of new and renovated hotels which offer a range of accommodation, suitable for visitors on any kind of a budget. Croatia as a whole has benefited enormously from the resent resurgence in interest and, as a result, an increasing number of low-cost airlines have set up cheap flights from airports across the UK.

You only have to look at pictures of Dubrovnik to understand why it has been dubbed the Pearl of the Adriatic but, as with all beautiful cities, it has to be experienced in the flesh to appreciate the extent of its appeal. So why not take a look at the range of cheap holidays that Global Holidays has to offer and jet off this summer to witness Croatia’s charm firsthand.

The best hotels to stay in Dubrovnik

If you’re looking for somewhere to go to impress your friends – you might be tempted by the idea of a weekend break in one of Europe’s more secluded capital cities.

Whilst Croatia’s tranquil islands and world-class beaches have allowed the country to begin reaping the benefits of tourism in recent years, the country’s capital city, Zagreb, is still relatively unknown, and the lingering memories of the recent war there have meant that, even ten years on, few tourists visit this charming town.

Around a fifth of Croatia’s 4.5 million inhabitants live in Zagreb, which managed to remain remarkably untouched despite being subjected to Serb missiles in the early to mid 1990’s. The city is an intriguing combination of eastern and western European influences, with the town centre’s traditional Austro-Hungarian buildings frequently displaying the latest designs from Italian and French fashion houses.

For lovers of art Zagreb has an abundance of open-air craft markets as well as several museums, ranging from the Naive Art museum with its simple imagery to the 17th-century house where Croatia’s best-known sculptor and artist Ivan Mestrovic created his masterpieces.

After sunset, there is still plenty to enjoy in Zagreb. Whilst much of the nightlife is student-orientated, those visitors with more cultural interests might like to pay a visit to the National Opera, or simply relax in one of the capital’s charming cafes with a traditional fruit brandy or local beer. There is also a fine selection of restaurants which serve a variety of cuisines ranging from traditional meat and potato dishes to more exotic, international flavours.

Zagreb is a city of contrasts, commended by the Lonely Planet guide for its “rich diversity of attractions” and, despite its rapid economic development, its green parks and beautiful architecture have ensured that it remains a picturesque and relaxing city.

With the noticeable increase in direct flights to Croatia this year, there has never been a better time to visit the country, and its capital should be high on your list of holiday destinations.

If you love beautiful scenery and history then Croatia and in particular the historic old town of Dubrovnik makes a fantastic place to visit. If you are looking for somewhere special to stay in Dubrovnik then we can recommend two hotels that might just fit the bill for you.

The first hotel that we can recommend in Dubrovnik is The Hilton Imperial. This building started life in 1895 as a palace and also it was a hospital during world wars 1 and 2. The building was almost destroyed during the Balkan conflict in 1991 but the Hilton Hotel Group refurbished the building in 2005. The Hilton Imperial Hotel now offers “art nouveau” style hotel accommodation near to the historic Old Town. Sea view rooms are available at an extra cost and a standard double room costs from 160 Euros a night. As far as food is concerned The Hilton Imperial offers a lavish breakfast menu and the hotel’s Porat restaurant serves a mixture of local Dalmation dishes such as Adriatic sea bass to international dishes like lobster.

The Hotel Bellevue is like something out of a James Bond movie says The Guardian. The Bellevue, Dubrovnik is a modern hotel which sits on the cliffs overlooking The Adriatic. All rooms boast a sea view and marble bathrooms and the bedrooms have beautiful furniture. There is also an indoor swimming pool. The Bellevue has two restaurants. The Vapor is one of the best seafood restaurants in Croatia. The other restaurant is the Nevera which offers a less formal dining experience. A double room at the Bellevue costs from 200 Euros a night.