With over 50 top-class museums, stunning public parks, historic buildings, and unique districts seemingly around every corner, Stockholm’s reputation as one of Europe’s favourite tourist destinations is richly deserved. 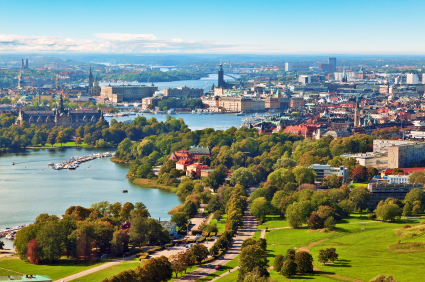 One of Europe’s most beautiful capital cities, Sweden’s capital sits on a network of fourteen tiny islands between Mälaren and the Baltic Sea.

Home to around 1.5 million people, part of the city’s magic lies in its effortless ability to blend old and new.

Indeed, the cobblestoned streets of 13th century Gamla Stan (Old Town) are home to a fanciful array of first-rate restaurants and cafés, small hotels, art galleries, and boutiques, all of which are snugly surrounded by medieval city walls.

Then, in stark contrast, you have the glass and steel towers of the modern Norrmalm district which bustle daily with bankers and brokers, not to mention the pedestrian-friendly Drottninggatan, one of Scandinavia’s premier shopping districts.

But there’s more to the city than contrast. Stockholm enjoys life’s finer amenities as well, and its dazzling dining scene features some of Europe’s top seafood restaurants.

Meanwhile, nightlife is in no short supply, and the city does its Northern European counterparts proud as a nation of beer-monsters.

Meanwhile, those with more cultural tastes may enjoy the Royal Swedish Ballet or the famed Royal Swedish Opera at Drottningholms Slottsteater, an 18th century theatre located on an island in the middle of Mälaren.

And for those on a shoestring, the city boasts the best selection of budget accommodation in Northern Europe.