The curious and captivating city of Sofia offers an amazing blend of culture and history, wrenched by religion, politics, and the traditions of East and West.

Indeed, it is the Bulgarian capital’s compactness and diversity as well as its plum location near the stunning Adriatic coastline that is increasingly drawing the tourist hordes away from the traditional Spanish and French ‘costas’ and towards the East not just for some summer sun but because of the excellent ski resorts that Bulgaria has to offer. 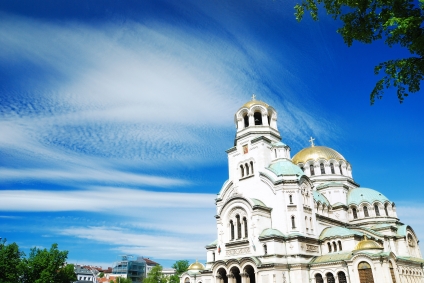 Sofia’s city centre is an eclectic mix of architectural styles, largely rebuilt after WWII bombings and complete with a yellow-brick boulevard.

Its churches and basilicas testify to a faith that extends – along with the settlement’s history – back 7000 years, and can be seen firsthand in such awe-inspiring edifices as Alexander Nevski Memorial Church, an opulent, gold-domed structure, and St. Sofia Basilica, a beautiful, quiet sanctuary dating from before the 6th century.

Other must-see attractions include museums of history and archaeology, the Rotunda of St. George’s (with Roman and Byzantine artifacts), the medieval frescoes at the Boyana Church, and the city’s markets, Turkish baths, and 16th century mosque.

Mt Vitosha, the rounded mountain which looms on the southern outskirts of Sofia, is a popular ski resort in winter, while in summer a chairlift operates for the benefit of sightseers.

If you like this article please use the buttons below.