Whilst the quaint city of Trieste is technically within the borders of Italy, those who visit tend to agree that its ‘feel’ is far from Italian. 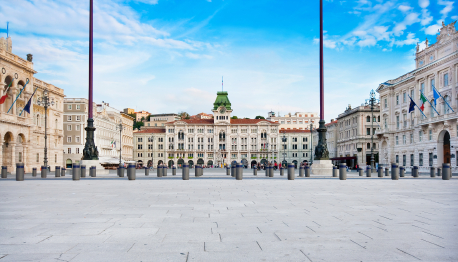 Located between Venice and the Istrian Peninsula, at the north end of the Adriatic Sea, the city has suffered a turbulent history that has left it with something of an ongoing identity crisis. Until the end of World War 2 Trieste was not part of Italy but was part of the old Yogoslavia.

But its charm, mystery and natural beauties have all contributed to the city becoming one of the most fashionable tourist locations in Europe.

Indeed, its inhabitants are one of Trieste’s most fascinating features. Its setting, where the Germanic, Slav and Latin worlds all meet, has ensured a veritable melting pot of cultures.

And this is reflected across the city, be it in the language spoken – Slavic is commonly heard – or the architecture, where Austrian influences are prevalent.

Tourists are drawn to the city’s hill of San Guisto, featuring ruins of a Roman forum, a cathedral, and castle, while karst caves and landscapes highlight nearby natural attractions.

Furthermore, Trieste boasts an expatriate literary tradition, as the likes of James Joyce and Rainer Maria Rilke spent time living and working in the city.

All in all, Trieste is a city deserving of its reputation as an up-and-coming holiday destination.