Bern is possibly most famous as the city in which Einstein lived when he stumbled across his famous theory of relativity, but today it is a hugely popular tourist destination in its own right.

Nevertheless the city has retained its famous stone bear pits that hold live bears and, in general, the city still retains a medieval quality, which is evident in the gothic architecture and cobblestone streets. 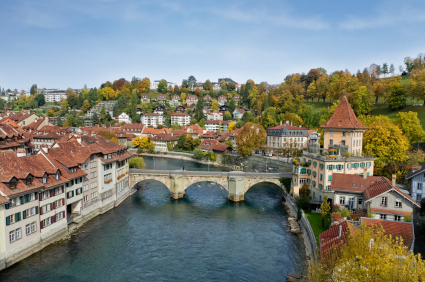 That’s not likely to change either, as Bern was named a UNESCO World Heritage site. Popular attractions include the thirteenth century clock tower, the gothic Cathedral, the Paul Klee collection at the Museum of Fine Arts, and the four-mile covered shopping arcade, which is the largest in Europe.

Wandering through the Old Town can be a magical experience and few cities in the world are so visibly wedded to their distant past, with architecture and a street plan essentially unchanged since the ‘olden days’.

The most hectic shopping goes on in the western half of the Old Town, on Marktgasse and Spitalgasse in particular; the older, eastern half is slow paced and tranquil.

But it’s when you walk under the crowded arcades that you get a full-on blast of modern consumerism, with music, shop windows and advertising vying for your attention.

Step a few metres to the side to walk in the open air and – with a little imagination – it’s easy to picture yourself in the Bern of the sixteenth century.

Bern is also famous for its swimming in the very fast flowing River Aare. In summer thousands of people take to the river to let themselves be taken along in the fast flowing current.

Take a look at this video which shows you what happens !