Athens, despite the furious publicity campaign that followed hot on the heels of the Olympics in 2004, is no mythical marble Atlantis.

The Greek financial problems have left a scar on the city and indeed the country has had bad press, but cast aside those problems and you will still find friendly people and ancient history difficult to match anywhere in the world.

However, Athens is a gregarious, if grubby, metropolis, made bearable by thronging tavernas, parks, and gardens. If you can ignore the ‘nefos’ (smog) that hangs over Athens, half of the battle is won. 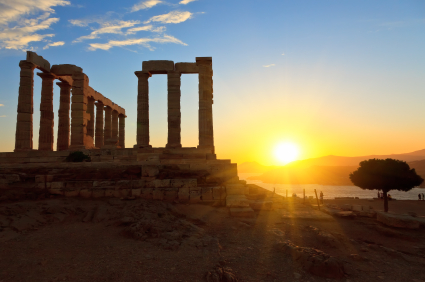 Although these days Athens is fashioned entirely from concrete, it’s what you do with concrete that counts. Houses hide their embarrassing grey underwear beneath geranium-filled balconies, orange trees and sinuous vines.

Athens’ markets remind the tourist of Greece’s oriental connections – they are reminiscent of traditional Turkish bazaars. Self-consciously charming neoclassical mansions are testament to the erstwhile splendour that made Athens the ‘Paris of the Mediterranean’.

Many of Athens’ streets lead to Piraeus, the city’s port, although the tourist will find that they rarely leave Plateia Syntagmatos (Syntagma Square).

The square contains the old Royal Palace and is the centre of the business district, with luxury hotels, banks and airline offices.

Beneath the Acropolis is Plaka, the old Turkish quarter, one of the prettiest and lively areas of the city. Tourists may also want to investigate Monastiraki, the market district, and Psiri, which is chock-full of trendy cafes and bars.

Book a hotel in Athens