The second largest city in southern Germany (behind Munich) and a burgeoning tourist destination it may be, but a bustling metropolis it most certainly isn’t. 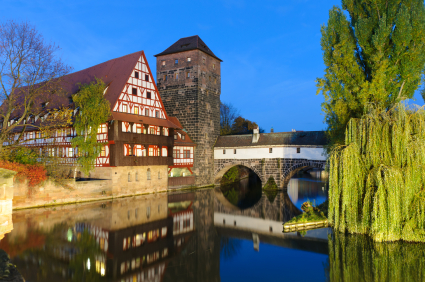 Brimming with picturesque markets, squares and narrow cobbled streets, a leasurely walk through the city centre will take you all of 30 minutes before you reach one of Nuremberg’s major landmarks – Berg Castle, one of the most important castles in the history of the German Empire.

Located at the top of a back-breaking hill, the castle offers splendid views of the city and, conveniently for budget travellers, there is a clean and friendly youth hostel on its doorstep.

Other noted attractions include Kaiserburg, the Albrecht Durer Haus, and the bustling Hauptmarkt – the city’s main market, located in Marienplatz square, home also to the delightful Schoner Brunnen (‘Beautiful Fountain’).

The city also puts on great festivals, including the Christkindlesmarkt each Christmas, and the annual International Toy Fair.

Venture away from the centre, though, and the spectre of Nuremberg’s tainted past looms large.

The Zeppelin Stadium, next to the Messezentrum in the Nuremberg suburbs, is where Hitler held his infamous rallies and draws visitors all-year-round.