Whilst the Mediterranean resorts of Bodrum and Alanya might be the most popular holiday destinations for many tourists if you want to see real Turkish culture you shouldn’t miss the city of Istanbul.

Istanbul,Turkey, the erstwhile head of the Ottoman Empire, is a sprawling settlement that straddles both rivers and continents. 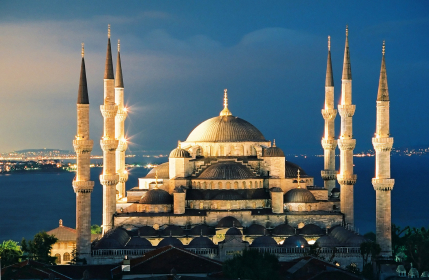 The minarets and domes offer the Eurocentric traveller an alternative Arabian Nights-themed romance, evoking a hard-won Islamic history from the days of Byzantium and Constantinople.

Although today Istanbul is cited as the happy portal between Europe and Asia, political correctness chooses to ignore history’s Titanic civilisation clash that still resonates in conflicts today.

Istanbul’s streets are witness to the most violent collision between the Occidental and Oriental worlds yet. Crusaders and janissaries once faced each other upon Istanbul’s streets and squares buoyed by religious fervour and a converters’ zeal.

The finest architecture often arises out of conflict, which is a piece of luck for sightseers in Istanbul. The sultan’s harem and Grand Bazaar are testament to a singular Islamic vision, whereas Istanbul has been tinged by European intervention in its rich arts culture – opera, music and cinema.

The Bosphorus river is Old Istanbul’s main artery, a true city centre that seems to centrifugally attract tourists, hawkers and joyous mayhem. The area around the river is a glorious confusion of hustle and bustle, ships and ferries, markets and persistent tradesmen.

Many of the main sights are situated in the Old City, such as Topkapi Palace, the Blue Mosque, Aya Sofya, the Atmeydani Hippodrome and the old city walls.

The intimidating Taksim Square, in the Asian part of the city offers a commercial alternative to the ancient attractions.

Istanbul: the crossroads of Europe and Asia