If you’re thinking of escaping the British Winter for a spell this year, why not visit Malta for a relaxing break in the Mediterranean.

This friendly destination is a delight to explore, with a rich history and culture, as well as delicious Mediterranean cooking, clear blue waters, a thriving nightlife in some parts, and neighbouring islands for a spot of even more secluded isolation.

The distinctive bright yellow, open-air mini-buses are an absolute must in order to get around, and although the ride will certainly be a bumpy one, it’s also great fun. The locals crowd on, standing up and filling every available space, and you’ll probably be surprised there aren’t more accidents along the way. 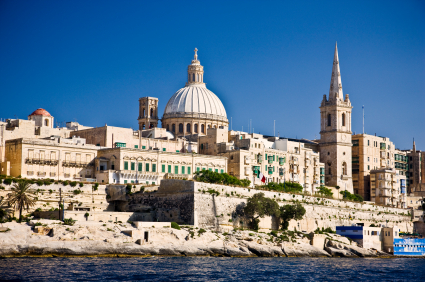 A visit to Malta has to begin with the capital, Valletta. This harbour town is built on a defensive mound, and the stone fortifications and walls point to the island’s chequered history as the target of frequent invasions and attacks owing to its strategic placement at a cross of civilisations.

There are many highlights in Valletta, but be sure to visit the market on a Sunday, and sample a local speciality: the pastizzi. These are pastries that come in only two flavours: pea and ricotta cheese, but are nonetheless delicious.

Elsewhere in Valletta there is the vast military bell, which still rings on the hour, and this is located near the “Malta Story” exhibition.

This takes the viewer on a multimedia tour of the island’s history, including the tenure of the Knights of St John who successfully fought off the Ottoman Turks and defended the island against all odds.

St John’s Cathedral is a baroque masterpiece, and the tomb of the city’ s founder, Grand Master Jean Parisot de la Vallette. It also houses one of Europe’s most important works of art: Caravaggio’s disturbing “Beheading of St John the Baptist”.

The criss-cross, stepped streets are also great for shopping, with lace, jewellery and filigree all local crafts that have been passed down form generation to generation through the ages.

Walking anywhere in Valletta is going to involve a bit of a climb, either on the way or on the way back, so if fitness isn’t your forte it may also be worth paying the price of one of the horse and carts that will dart past you every now and again.

The old mediaeval capital of Mdina is also worth a visit, and is at its best in the early evening when its narrow streets conjure an atmosphere at once romantic and slightly eerie. Stray cats are abundant all over Malta, but Mdina seems particularly prone to the feline hordes.

If the Maltese fancy a break, they head to neighbouring Gozo or Comino: two beautiful islands with only a handful of shops, houses and hotels between them. Take a motorboat out to Comino, and spend a day snorkelling and swimming in the cool, crystal waters of the aptly named Blue Lagoon.

The town to head to for the nightlife is Paceville, which is located near St Julian’s on the coast. This is a complete contrast to the relaxed pace of the rest of the island, and is where many of the younger locals themselves head on a Friday or Saturday night when the sun goes down. Many of the bars and clubs charge no entrance fee, and there are also more shops, as well as a number of cinemas.

If visiting during the summer months, you may be lucky enough for your trip to coincide with one of Malta’s village “Festas”.

These are a source of great pride to the inhabitants of each village, and unsurprisingly can get quite competitive, with each trying to throw the best party.

Each village has its own patron Saint, and on the evening of the Festa, his statue is removed from the church and paraded ceremoniously and joyfully around the streets for all to see.

This is accompanied by hours of fireworks and streamers, and plenty of goodies on sale from stalls lining the streets, including another Maltese special: sticky nougat.

Malta is perfect for families with young children, being both safe and friendly, with every corner offering a different insight into its colourful past. Although it was pleased to join the other EU member states in the last round of accessions, it is equally proud of its roots in what can truly be termed a crossroads of history.